What is Typecasting in C?

Typecasting is converting one data type into another one. It is also called as data conversion or type conversion in C language. It is one of the important concepts introduced in ‘C’ programming.

Implicit type casting means conversion of data types without losing its original meaning. This type of typecasting is essential when you want to change data types without changing the significance of the values stored inside the variable.

Consider the example of adding a character decoded in ASCII with an integer:

Here, compiler has done an integer promotion by converting the value of ‘k’ to ASCII before performing the actual addition operation.

The compiler first proceeds with promoting a character to an integer. If the operands still have different data types, then they are converted to the highest data type that appears in the following hierarchy chart:

Consider the following example to understand the concept:

First of all, the c variable gets converted to integer, but the compiler converts num and c into “float” and adds them to produce a ‘float’ result.

We cannot perform implicit type casting on the data types which are not compatible with each other such as:

In all the above cases, when we convert the data types, the value will lose its meaning. Generally, the loss of meaning of the value is warned by the compiler.

‘C’ programming provides another way of typecasting which is explicit type casting.

In implicit type conversion, the data type is converted automatically. There are some scenarios in which we may have to force type conversion. Suppose we have a variable div that stores the division of two operands which are declared as an int data type.

To force the type conversion in such situations, we use explicit type casting.

Let us write a program to demonstrate how to typecast in C with explicit type-casting. 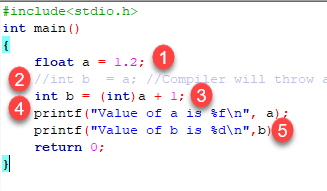 In this way, we can implement explicit type casting in C programming.

Keep in mind the following rules for programming practice when dealing with different data type to prevent from data loss :